What is a Golf Ball Marker? (Find the Answer here)

If you’ve ever played a bit of golf, or at least watched it on TV, you’ve probably noticed golfers marking their ball’s spot on the green with a small object.

Even though it’s probably the smallest piece of golf equipment, a golf ball marker is nevertheless very important and something you’re likely to use on almost every hole.

While it may seem insignificant, a ball marker helps the game move along and provides a fair playing ground for everyone.

However, many players, especially those just starting with golf, are not 100% sure what a golf ball marker is and how the game rules regulate its use.

Below, I’ll explain everything you need to know about golf ball markers and how to use them on a golf course.

What is a Golf Ball Marker?

When your ball is on the putting green, you’re allowed to lift it off the ground.

You can do it so you can clean the ball, line it up for your putt, and, most importantly, get it out of the way so it’s not an obstruction for other players.

However, when removing it, you have to mark its spot, so you can return it to the exact same place on the putting green.

This is where the ball marker comes in.

So, a golf ball marker is a relatively small, flat, and artificial object that golf players use to mark the spot on the putting green where it was lifted from.

If the ball remains in its position instead of being replaced with a marker, other players may not have a clear line of sight on the putting green and may hit the ball when it’s their turn to putt.

What Can You Use as a Ball Marker? 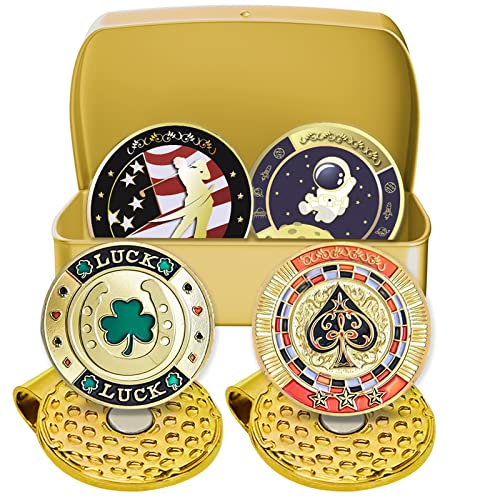 The Equipment Rules that are a part of the golf rulebook clarify what type of object players can use as ball markers.

While this leaves a lot of room to choose a ball marker to their liking they should be easy to notice, but not too distracting for other players.

Due to all this, most golf players use coins or poker chips to mark their balls, as they fulfill all of the above-mentioned conditions.

Still, many golfers use personalized items that allow them to express themselves in, otherwise, rather rigid games.

How to Use a Golf Ball Marker?

Golf rules define how the position of golf balls and the green should be marked and failing to comply with these rules may result in a penalty.

Even without rules, the etiquette on the golf course and common courtesy towards other players should be enough to determine how you will use a golf ball marker.

Commonly, the ball marker is placed right behind the golf ball, although it’s not mandatory.

However, it has to be next to the ball, so you can also place it in front, or to the left or right of the ball.

When replacing the ball, a player must do so using their hand and setting the ball down.

Of course, when putting the ball back, it should be placed on the side of the marker, depending on the original marking.

Can Someone Else Replace the Golf Ball with the Marker?

Besides marking the ball themselves, players can have someone else do it for them.

However, in that case, the authorization to do so must be given and not just for every round, but every time the ball is lifted.

The only exception is the caddie who can lift the ball off the putting green without authorization.

Can You Move a Golf Ball Marker?

Under the golf rules, the golf ball marker is a movable obstruction. This means that, in some cases, you can move it without earning a penalty.

Often, a ball marker will be moved on request from another player.

This usually happens when that other player feels that the marker is in the way of their putt and obstructing the line to the hole.

When moving the marker, it’s common that you move it one or more club lengths to the side so you can later return it to the exact same spot.

Still, if a player chooses to putt with the ball marker still in place and the ball hits the marker and deflects off of it, the ball must be played from wherever it ends up on the putting green.

What are the Potential Penalties Related to the Use of Ball Markers?

Failing to use ball markers properly and according to rules can result in certain penalties for a player making an infringement.

Using the golf ball marker not only helps the game flow but is also considered an important part of golf etiquette.

Lifting the ball from the putting green and replacing it with a marker allows other players to putt freely and removes an unfair advantage for players who got the green first.

Even if you’re playing a casual game with your friends, you should always have a ball marker with you, especially since it’s so small that it can fit in your pocket.

In addition, it’s one of the rare pieces of golfing equipment where you’re allowed to add some flair to it.

So, you can use markers, for example, in your favorite colors, with meaningful dates imprinted on them, or with a logo of your favorite sports team.

How Long Do Aerated Greens Take to Heal?

What is a Golf Ball Marker? (Find the Answer here)

Can You Wear Spiked Golf Shoes Without The Spikes?

What is a Golf Stick Called? (Answered)

Do Golf Shafts Wear Out? Find Out The Truth!

How Long Do Golf Grips Take To Dry?