Many casual golfers and those new to the sport play with whatever golf balls are available to them on any given day.

Commonly, their thinking is that these are just golf balls and they can’t make much difference.

However, more experienced golfers know the importance of the right golf ball and how much it impacts your performance.

Each golf ball model is designed to suit the game of a certain type of player.

Most manufacturers offer a wide range of different balls to fit players of all levels.

Srixon, one of the industry leaders in the past decade, is no different, with a line of balls that cater to golfers with varying degrees of skill and swing speeds.

Below, I’ll focus on two of their most popular balls, and compare Srixon Z Star vs Q Star to see which one is better suited for a particular style and level of play. 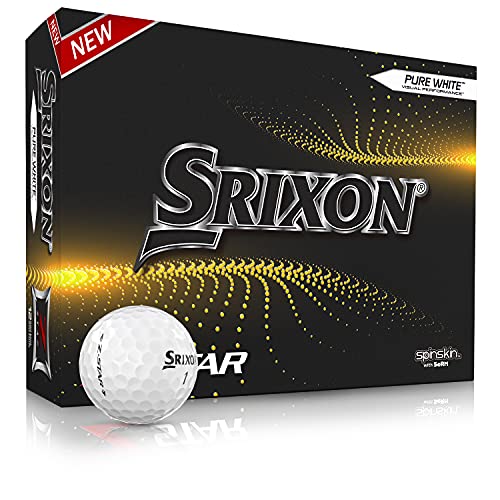 Srixon Z Star stands out among the models in the company’s range as a premium, tour-level ball, designed to compete with the premium products in the industry, such as Titleist Pro V1.

We can safely say that Z Star more than meets high expectations and deserves a spot in the top tier of golf balls currently available on the market.

Mainly intended for more advanced players with faster swing speeds, this ball is manufactured with masterful craftmanship and features the highest level of feel and control.

It’s soft off the putter and has great stopping power on the green while providing a high level of spin and high-launch angle for greater distance on drives.

Plus, as we’re already used to with balls from Srixon, it looks really nice, with the company’s characteristic simple and stylish design.

One of the first things most experienced players look for in a golf ball is its level of compression.

The compression of Srixon Z Star  clocks at 90, making it a great fit for players with faster swing speed.

It should be noted that Srixon also offers the Z Star XV version which features even higher compression but at a cost of a lower spin rate.

Despite compression that makes it one of the firmest balls on market, Z Star still provides consistent spin and a relatively soft feel, typical of medium compression balls.

This makes it an excellent choice for both low handicappers, but even players with a high handicap can use it to add some distance to their drives.

I already mentioned that Z Star provides a fairly soft feel that you would expect of balls with lower compression.

This is achieved thanks to the three-piece construction featuring a large soft core, thin urethane cover, and a stiff layer in between.

Besides creating a good feel, this ball also delivers great feedback and you will instantly know if you’ve managed to hit the sweet spot.

Thanks to this helpful feedback, players can easily refine their swing and even make certain adjustments in the middle of the round.

Additionally, Z star is very forgiving and provides some breathing room on mishits, which is why it can also be sued by players with a lower skill level.

All this increases players’ confidence in their ability to control the ball in the way they want to.

If you play golf seriously, you know how important dimples are for greater distance and higher elevation, as well as better accuracy.

As Srixon Z Star was mainly designed to provide more speed and distance, it was designed with 338 Speed Dimple Pattern which is ideal for maximizing your shots.

It helps the ball launch higher mid-air, decreases the drag, and adds more lift, which all adds up to more yards on the hit.

In addition, this dimple pattern adds to the stability of the ball and allows it to fly straight even in extremely windy conditions.

A stable and consistent fight path is essential for more control and precision on long drives.

Thanks to its urethane cover and a special material called SeRM which work to improve spin and add more friction, Srixon Z Star performs well both on the green and on the long drives.

The result is a mid-spin ball that allows players to have plenty of control when on the green, right up there with other premium golf balls.

The spin rate on the drive is a bit lower, which is great for players who want their shots to go straighter.

Therefore, it can work for both low handicappers looking to maintain their level of play and those with higher handicaps attempting to improve their game. 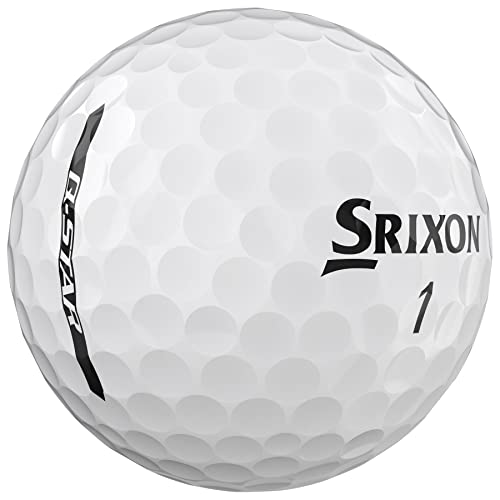 While Srixon Z Star is a premium ball that has its place on the tour, the Q Star is more intended for players who appreciate value for their money and look to find a balance between the ball’s performance and price.

It’s a middle-of-the-range ball primarily designed for mid and low-handicappers.

It basically sits in the middle of Soft Feel and other 2-piece Srixon balls and the Z Star premium range.

Basically, this is the ball for those who value greater distance on their hits over greater control and optimized spin.

Still, most of the intended users will be more than satisfied with its performance on the greens.

As with most golf balls designed for players with moderate swing speed, the compression of Srixon Q Star  is on the lower end, at 72.

This means that it’s easier to hit properly than harder compression balls and provides a somewhat softer feel.

This makes it a great choice for players who are currently at an intermediate or beginner level, allowing them to nail long and straight shots.

Those with swing speeds in the range of 75-95 mph should the ones most interested in playing with this ball.

Q Star is very responsive around the greens and even the more advanced players will appreciate its soft feel.

The feedback, the sound, and the feel on the shot are much closer to the premium tour-level balls than to products in the same price range as Q Star.

Like most Srixon balls, it features a softer outer cover, but unlike the Z Star line, it’s constructed of two pieces.

The cover is made of ionomer which is the most deserving for great feel and excellent control on the green and great spin on putts.

The core is made with Srixon’s FastLayer technology and provides high speed and very good distance when hit off the tee.

At the same time, thanks to the two-piece design, the spin on the long drives is reduced.

Plus, Q Star has a lot of forgiveness, which is very important as mishits happen often with less advanced players.

Similar to Z Star, Q Star also features the 338 Speed Dimple Pattern. So, it also has a decent lift and spin, which both make the ball fly further.

This is another factor that puts Q Star closer to the balls in the premium tier, as 338 dimples are commonly seen with more expensive balls.

Just like the more expensive Z Star, Q Star has a fairly straight flight path even in unfavorable conditions.

The spin optimization is the area where Q Star falls short of golf balls that are in the premium tier and commonly used on the tour.

However, it’s still decently above the products in its own price range.

It does have a nice spin on full swings, allowing straight flight and great distance, but doesn’t perform that well off the wedge, nor does it have great stopping power on the green.

However, due to the low compression, low handicappers will still feel good when putting with Srixon Q Star.

Even though they look almost the same, the more detailed Srixon Z Star vs Q Star reveals some significant differences.

When on the course, most of these distinctions become easily noticeable and can greatly impact your game.

Both Z Star and Q Star are designed to deliver great distances, mainly thanks to the fact that they both feature Srixon’s FastLayer Core system.

However, you should be more interested which will provide more distance to your specific game.

Due to higher compression, Z Star will fly further when hit by players who have higher swing speeds.

On the other hand, golfers with slower swings will benefit more from using Q Star balls, whose compression is significantly lower *72.

Playing with Z Star if you have a slower swing will likely have a negative effect on your distance.

Z Star and Q Star both feature Spin Skin technology and have the same dimple pattern. This means that, off the tee, they will produce a similar spin rate.

However, as you get on the green you’ll start to notice the difference mainly because Z Star has a Urethane cover, while the cover of Q Star is made of Ionomer.

Plus, the former has a three-piece construction, while the latter is constructed of two pieces.

Therefore, Z Star will perform much better on the green with excellent spin and great stopping power, giving you a greater amount of control.

Q Star does have a nice feel on the green but won’t spin as much as its more expensive counterpart.

While the feel is a mostly subjective category, some balls are better in this category than others. Z Star and Q Star both have a rather soft feel, especially on the green.

However, Z Star feels a bit more responsive, as they are a bit harder, more compressed, and have a thin outer core.

Still, Q Star’s softness will likely be a better fit for players with a slower swing.

Z Star is the more expensive of the two, but you’re paying for a premium ball with all characteristics and features of a tour-level product.

Still, there’s no need for less advanced players to pay this premium price.

They’re more than likely to be perfectly satisfied with a cheaper Q Star, which provides great value at the price.

Srixon belongs at the very top of golf equipment manufacturers, especially when it comes to golf balls.

So, both of the balls reviewed above come with guaranteed quality and excellent performance.

However, each of them is designed for a certain type of player and produces optimal performance when used by the golfer they’re indeed for.

Therefore, before making a decision and purchasing either Z Star or Q Star, make sure to have an honest assessment of where you are as a player and what is your skill level.

Then, you can opt for a ball that fits your playing style and experience and use them as a tool to improve your game.

Can You Golf by Yourself? (Answered in Detail)

What Golf Towels Do the Pros Use? (Solved)

Are Golf Courses Open in the Winter? (Solved!)

Bridgestone Tour B XS vs Pro V1X – What’s The Difference?

What is a Golf Stick Called? (Answered)

What Happens if Golf Cart Batteries Run Out of Water?