Golf is a sport that is proud of its tradition and is heavily influenced by it.

Still, it has seen many improvements throughout history.

The equipment we use today is significantly different from what was used in the early days of golf.

The invention of new technologies and the introduction of new materials had the greatest impact on the clubs and balls.

Golf balls have particularly gone a long way from the original wooden balls, over feathery and gutta balls, to rubber core balls which are the basis for what we use today.

The golf ball development never stops and their design is constantly improving with the help of high-tech science.

Among the most frequently mentioned ideas and developments are magnetic golf balls.

There’s been much discussion about it and some people are even unsure are golf balls magnetic or if this technology is something that is yet to happen.

Golf balls are not magnetic, at least not yet.

Modern golf balls, depending on the design, commonly have a core made of multiple layers of different resins or rubber.

The core is wrapped in a more or less thin cover, which is of various materials, such as Urethane, Surlyn, or Ionomer.

None of them has magnetic properties. Therefore, the ball can’t be magnetic.

Still, the idea of a magnetic golf ball has been around for a while and several companies are working on developing balls with magnetic properties.

The concept has been met with some controversy in the golfing community, as many believe that it would taint the sport and lead to cheating.

However, as with every new technology, magnetic balls have the potential to bring both positives and negatives to the sport.

Magnetic golf balls if they were to be introduced and entered into mass production, could make a golfer’s life on the course much easier.

It would allow for much easier handling of golf balls, as well as their tracking and finding when lost.

In theory, magnetic golf balls should snap tightly against the metal face of the club head.

This would make it much easier for players to pull up balls or pick them up from the ground.

Also, magnetic balls would be much easier to find when they end up in the rough, bushes, or in the pond.

Instead of rummaging through the shrubs, you could just stick the club in the bushes and move it around until you feel the ball connecting to the club head.

Considering how many balls golfers lose every year (estimated 300 million in the US alone) this would certainly be welcomed by most players.

The majority of opponents of introducing magnetic balls to golf are concerned that it might jeopardize the integrity of the sport and make room for cheating.

Their fear is that magnetic balls could potentially be doctored to improve the ball’s performance and create an unfair advantage for those using it.

The ball with magnetic properties could be impacted on its trajectory by another metal object, thus changing its path, especially on the green where the ball moves much slower and is hit with less force.

Having a hidden metal object would allow players with dishonorable intentions to manipulate the ball’s trajectory and adjust it to get it to go where they want it.

In addition, many critics of the magnetic ball idea simply feel that their use would go against the spirit of the game and centuries-old golfing traditions.

Are there any Golf Balls with Metal Core?

Something close to the concept of a magnetic golf ball already exists. I’m talking about golf balls with metal cores.

While they don’t have magnetic properties, some of the technology implemented for manufacturing metal core balls could be, in the future, used for producing magnetic balls.

The balls in question, made by the company called OnCore, feature hollow metal core which, according to the manufacturers, brings many benefits.

Mainly, it reduces the spin of the woods which results in reducing the slices by around 30%.

When used with irons, these golf balls, thanks to their heavy metal core, add more spin and increase the control over the shot.

It may surprise you to learn that OnCore balls are USGA and R&A conforming and have already appeared on the USGA list of conforming balls, so you may freely use them in games.

What are Magnetic Ball Markers? 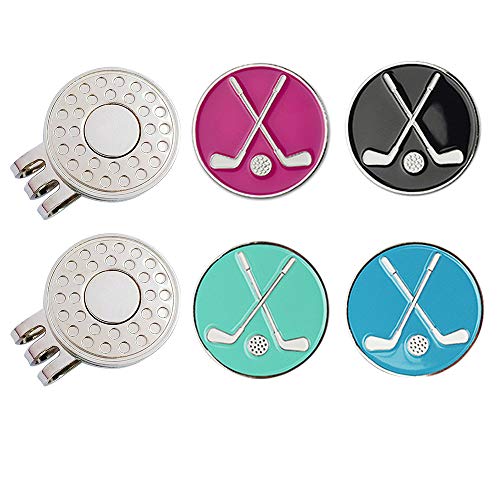 Even though we don’t have magnetic balls just yet, magnets are already present in golf, just not where you might expect them.

Magnetic ball markers have been in use for some time and plenty of golfers find them to be very helpful.

They’re particularly useful for those who are still beginners in golf as well as those who struggle with back or knee issues.

Despite their name, the tee markers themselves are usually not magnets.

Rather, they feature a magnetic carrier or a clip that can be attached to the belt of the hat for easy access.

This comes in pretty handy, as it ensures that the marker snaps firmly into the magnetic clip set in the carrier, so you always know where it is.

While they’re commonly inexpensive, losing your ball marker is still a hassle and magnetic clips ensure that you don’t have to deal with lost markers.

A lot of players, jokingly, blame their bad shots on magnets in the balls, supposedly skewing their shots toward bushes and ponds.

However, in the relatively near future, magnetic balls could not only be a joke but a regular part of the equipment used on the golf course.

It’s probably only a matter of time before some of the companies working on developing that kind of project have their patent approved and magnetic balls become available on the market.

Time will tell whether it will be a welcomed improvement or an unneeded novelty, but surely many golfers would at least like to try them.

Can You Golf by Yourself? (Answered in Detail)

What Golf Towels Do the Pros Use? (Solved)

Are Golf Courses Open in the Winter? (Solved!)

How Long Do Aerated Greens Take to Heal?

Club Champion vs. GOLFTEC – A Comparison